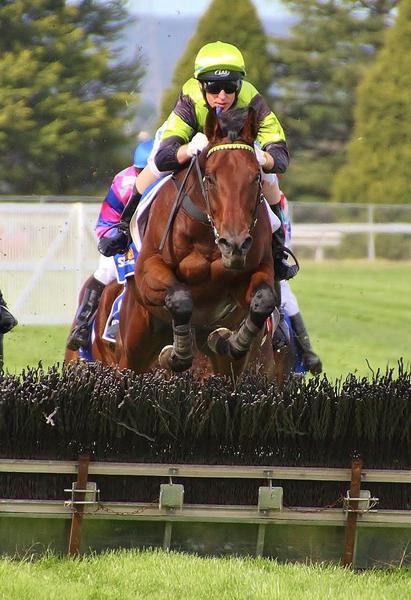 Exciting jumper Beer Garden has lead from start to finish, breaking his jumps maiden in emphatic style by 25 lengths today in the QLS Logistics Maiden Hurdle (3200m) at Ballarat today.

“He was very impressive today. The horse that beat him at Warrnambool was pretty impressive at Sandown against some quality jumpers so she may have been a bit underestimated,” O’Sullivan said.

“He’ll go to Warrnambool for sure and we’ll probably throw him in the deep end and see if we can get a run in the Galleywood Hurdle (3200m, May1).

“There’s a restricted race the day after on the Thursday but I’d be keen to have a crack at the Galleywood while he’s going so good.”

Sent straight to the front by jockey Brad McLean, Beer Garden started to extend his lead as the field completed the double around the back straight with the race as good as over by the home turn.

Speaking after the victory, McLean admitted that he could have found a pretty serious jumper.

“He was pretty dominant. He raced a bit keen early when one or two of them were annoying him but once I let him roll along in front he jumped beautifully and made a bit of a mess of them,” McLean said.

“Dan (O’Sullivan) and his team do a fantastic job with their jumpers and I’ve always had a bit of luck with Dan, but it looks like I’ve got on a nice one here.”

Beer Garden will likely be one of two jumpers heading to Warrnambool for O’Sullivan with Jungle Fighter, who was runner-up behind Stoneblack in the opening event at Ballarat, also likely to make the trip west.