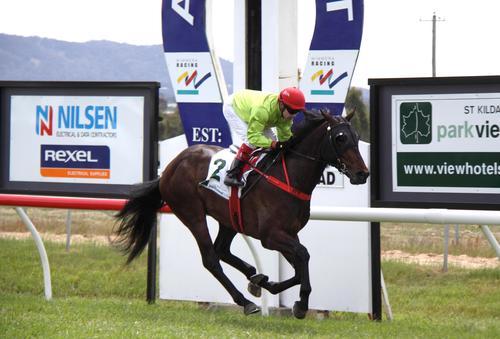 Wayne, with his family and friends, has been responsible for the two most recent winners for the stable.

OUR TIGER LIL was a winner several weeks ago, breaking a long run of minor placings by our horses.

And yesterday, on Ararat Gold Cup Day, TAKE THE FAITH put on a most impressive display of strong front-running, to lead all the way over 1600 metres.

Ridden perfectly by Dean Yendall, TAKE THE FAITH took the lead soon after the start, and was never headed.

Dean showed why he is one of the best riders in Australia, rating the horse superbly throughout, and kicking away in the straight to give nothing else a chance.

It was great to see some of Wayne's co-owners present to enjoy the win.

We hope that TAKE THE FAITH will now go on to further success.

The stable's other runners at Ararat also performed admirably.

WAYS OF A TYCOON showed terrific fighting qualities to run a very strong second placing, while TESTA GRIGIA fought on well to be third behind TAKE THE FAITH.

Although unplaced, OUR TIGER LIL was far from disgraced after leading and setting a fast pace over 1600 metres. Another win for her is just around the corner.