Double for Dan at Ballarat 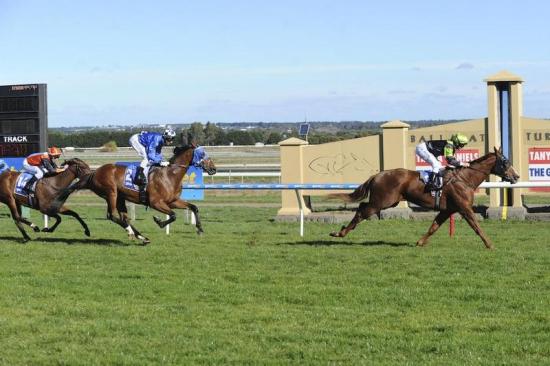 Oh so close to a treble yesterday with two winners and a second at Ballarat.

Race one saw Tuscan Fire in the winner's stall for the fifth time this preparation.  It was also his second win from four hurdle races.  He still races quite keen, which isn't ideal in jumping races, especially for his jockey Brad McLean who does an excellent job on him.  Dan and the team will continue to tweak things with him, with the view that when he grasps the concept 100% he will be one serious contender.

Three races later the stable saluted again with promising 3yo, Testa Grigia. His group of owners were keen to see their horse run over the Warrnambool May Carnival, but after drawing terribly wide there, Dan opted to hedge his bets on a better draw at Ballarat.  Thankfully it paid off, with Luke Currie giving him the run of the race and him simply being far too good for his opposition on the day.

Days like yesterday make all the hard work worthwhile and we wish for many more like it!