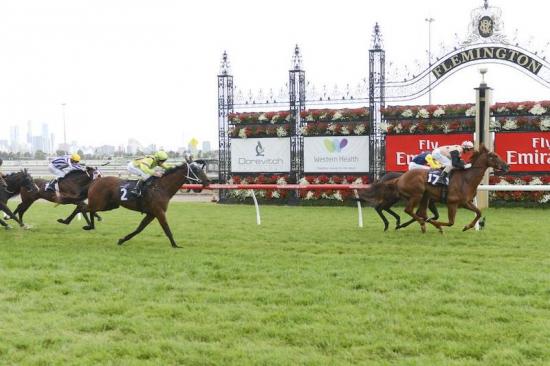 An emotional sequel to Victoria's Black Saturday bushfires played out at Flemington on Saturday when British General won the Dorevitch Pathology Handicap.

British General's owners welcomed the gelding's first city win with subdued joy as they recalled the events of almost four years ago when they faced the loss of everything they owned as fires swept through the hills north of Melbourne.

"This is a very emotional day," said part-owner David Brown.

"He was just a young horse at the time and we didn't know if he'd survived.

Brown and his family lived on a small property at Strathewen where 27 of the towns 200 residents died and 80 homes were destroyed in the fires.

As he flames approached, the Browns released their horses from a stable block in the hope they would survive.

Brown said his older broodmares, and British General, lived while the younger mare died after running off into the bush.

"We got British General out of the barn, but he bolted," Brown said.

"The next day we found him running up and down a gravel road with everything on either side burned."

Among the broodmares lost in the fire was British General's mother British Lion who the Browns had hoped would become the foundation of their breeding business.

"We lost all of those young mares and the stable block and the fences, but a lot of people lost much more," Brown said.

The scars of Black Saturday have mostly healed for British General who has now won five of his nine starts with the prospect of more to come.

Trainer Dan O'Sullivan said he had now figured out some of the horse's idiosyncrasies and would now consider some better races for the five-year-old.

"I had a good talk with Luke Currie who rode him last start and we worked out a few things," O'Sullivan said.

Ridden in the 1410m race on Saturday by Glen Boss, British General ($10) won a straight-long battle with the runner-up The New Boy ($6.50) to score by a short neck.