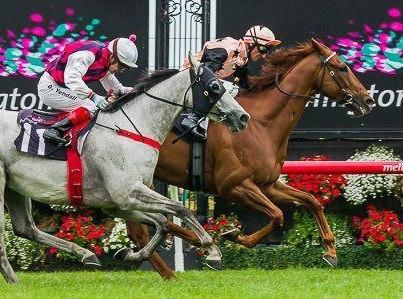 It was a case of history repeating at Flemington today as trainer Dan O’Sullivan scored a double at Flemington highlighted by progressive gelding British General taking out the $120,000 Listed Chester Manifold Stakes (1400m).

Speaking after the victory O’Sullivan said it was a relief as much as anything.

“You don’t believe that you can do it again and come here and have everything go right,” O’Sullivan said.

“It’s like having a good hand at poker twice in a week.

“I never had so many interviews in my life since New Year’s Day.

Sent out the well-backed $2.10 favourite, British General was sent straight to the front by jockey Glen Boss however he didn’t have it all his own way with Big Buddie ($18) racing on his outside.

After quickly shaking Big Buddie at the top of the straight, British General kicked clear before having enough in reserve to hold off the late challenge of Dash For Viz ($10) who came from near last to go down by just a neck on the line.

Under The Eiffel ($8) was 1.6 lengths away from the winner in third, narrowly ahead of By The Way ($11) who rattled home from last to finish fourth.

The fourth win in a remarkable quartet for jockey Glen Boss, Boss said it was definitely the best of the three victories since he’d been on British General’s back.

“This horse had to do it tough today, it was his first time in open company and he had another horse breathing down his neck the whole way,” Boss said.

“He’s got really good qualities, he digs deep, he fights and he runs really good sectionals the whole way.

“This horse has got a good story, it’s a terrific story for some wonderful people in racing and it gives me a thrill to ride a winner for the connections.”