Jungle Fighter two from two over the jumps 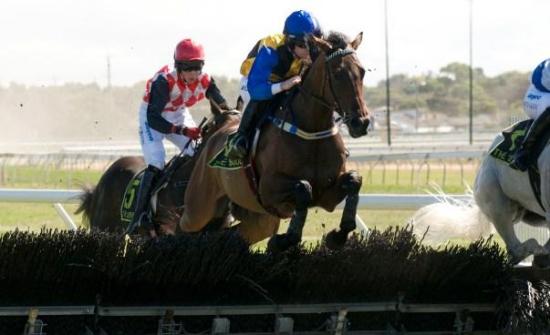 Trainer Dan O’Sullivan came away from today’s Warrnambool meeting with a jumps win but it may not have been provided by the horse many punters expected.

Dominant trial wins and an impressive staying record on the flat had many punters cheering for Beer Garden ($2.80) but the son of Aristotle was no match for eight length winner Xaar Best ($3.20).

However O’Sullivan bounced back in the second of the day’s jumps events when exciting jumps proposition Jungle Fighter proved too classy in the $20,000 Bidmade Plastering Open Hurdle (3231m).

Ridden by in-form jockey John Allen, who was fresh from victory aboard Gotta Take Care in yesterday’s Yalumba Classic Hurdle at Oakbank, Jungle Fighter ($3.50) raced midfield on the back of a solid tempo set by short-priced favourite King Triton.

The five-year-old looked to be travelling easily approaching the home turn and joined the leaders over the final jump, outstaying Reckless Rat ($5.50) and King Triton ($1.70) to claim victory by one and three quarter lengths.

The win maintained Jungle Fighter’s unbeaten record over jumps and is likely to put feature races, including the $100,000 Galleywood Hurdle (3200m) during Warrnambool’s May Carnival, on O’Sullivan’s radar