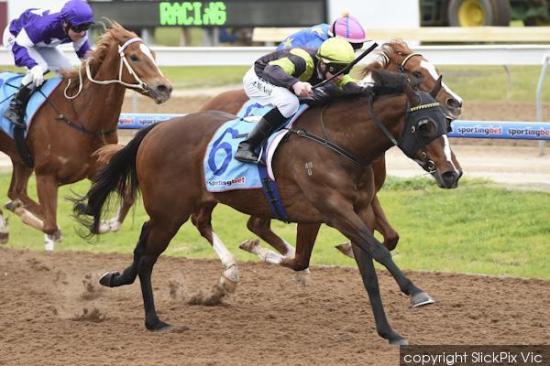 Leicameares broke through for a much-deserved maiden victory on the synthetic track at Geelong on Tuesday.

The talented Bel Esprit filly had shown all preparation that a win was not far away and she delivered in good style with a half-length triumph in the Emsley Lodge 3YO Fillies Maiden Plate (1200m).

Jockey Ben Melham, who had ridden the horse in her past two runs at Geelong, was unable to attend the meeting and was replaced by apprentice Jye McNeil shortly before the race.

And McNeil made no mistakes with the pick-up ride, taking Leicameares across the field from the wide barrier to sit outside the leader for much of the trip. The horse then strode to the lead on straightening and held off a late charge from Greg Eurell-trained Kentucky Heart, who snuck home along the inside to grab second.

The win is Leicameares' first in seven career outings and follows an unlucky eighth first-up at Kilmore in late May, a fast-finishing fourth at Geelong in mid June and a close-up third at the same track later that month when the horse was forced to race tightly all the way up the straight.

Trainer Dan O'Sullivan will now look to Leicameares' next start, which is looking like being a Super VOBIS race, either at Caulfield on July 26 or at Sandown on July 27.

The stable sends its congratulations to all of the connections.