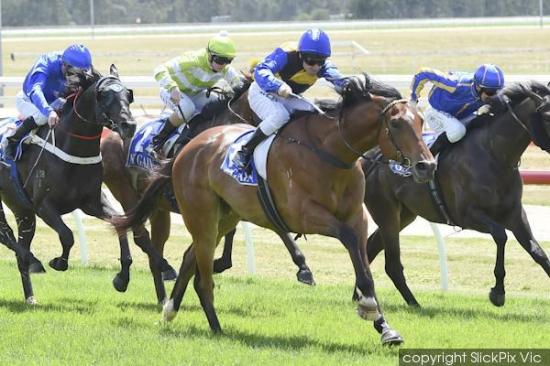 Talented galloper San Carlos is a maiden no longer following a tough victory at Seymour on Sunday.

The Dan O'Sullivan-trained gelding broke through at start number three in a three-year-old maiden over 1600m.

It was a gutsy performance from the son of Mr Nancho, who crossed from an outside barrier to a spot outside the leader for much of the trip before fighting off all challengers to land a narrow win.

"He is a progressive horse. Both of his first two runs have been very promising," O'Sullivan said.

"We bought him out of New Zealand at the breeze up sales and he has been really impressive in his work. There has been a little bit of teaching him to get it right, and even today outside the leader, he sort of showed that he is maybe a bit more dour and probably looking for 2000m.

"He is a very nice horse and his foaling date is not until the middle of December, so he has still got a long time to really mature."

Jockey Ryan Maloney, who was back aboard the horse after his debut run at Donald in September, said San Carlos "relaxed quite well" during the run.

"He is a progressive type, is still learning his trade and I'm sure he will be better over a trip," Maloney said.