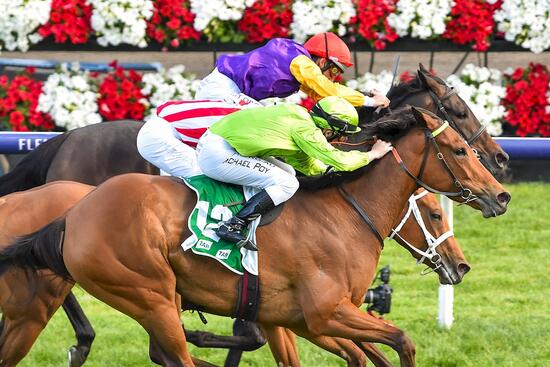 Story by Peter Falconer of throughbrednews.com.au

The prestigious $300,000, Group 2, TAB Matriarch Stakes (2000m) for older mares saw Affair To Remember (by Toronado) rewarded for a very consistent couple of seasons in training with a career-best victory on the final day of the 2020 VRC Melbourne Cup Carnival at Flemington in Melbourne.

A three-time winner and Group 1 Australasian Oaks (2000m) placegetter going into today’s assignment, Affair To Remember landing in front of her rivals right on the famous Flemington winning post to score in a three-way photo-finish from Paradee  and Toffee Tongue (NZ).

All honours went to trainer Dan O’Sullivan and apprentice jockey Michael Poy who again displayed a great deal of maturity for a young rider rising through the Melbourne ranks.

Winning trainer Dan O’Sullivan was the first to point out that the winner was deserved of her maiden black-type success after having previously shown the ability required to win in stakes race company.

“She certainly deserves it,” O’Sullivan declared. “She’s been racing well.

“She doesn’t help herself; she walked out of the barriers again today. Michael [Poy] was very confident and he rode her that way.

“It’s a big relief for the owners who have stuck thick. To get a Group 2 win after getting a Group 1 placing in the autumn is a really big tick for her.”

O’Sullivan then went on to reveal his short- and long-term plans for Affair To Remember.

“I haven’t ruled out the Ballarat Cup in two weeks time just yet, but after a tough run today, that might be enough. I’ll see.

“We’ll think about what we do in the autumn, [and] even this time in the spring next year. Today was the target.”

O’Sullivan was also keen to make reference to the winning rider Michael Poy.

“He’s done a good job. A couple of the races he got to win on her he was able to use his claim in Benchmark races, and that was helpful in getting her rating up. The owners were very pleased with the way he was riding her, and so was I, as he’d worked her out.

“One thing about him — I was having trouble getting jockeys to stick, but he was able to stick and get the job done today.”

The son of former top-ranked Melbourne jockey Michael Clarke, Poy was obviously elated after the win.

“She tends to begin a tad slow, and when she did I had to go to ‘Plan B’ and not move on her at all,“ explained Poy after his winning ride.

“[I] Didn’t want to be that far back, but they set a good pace. Greysful Glamour set a hot speed and I knew today she was traveling beautifully. When I rode her at Caulfield one day, she just didn’t travel the same.

“Today she traveled like she was going to finish off … She was strong through the line and you can see how she’s pulled up tremendously.”

Poy added: “I have to say a big thanks to Dan O’Sullivan and the whole team there. Everyone that’s a part of this team for keeping me on this horse.

“I know I’m still an apprentice, and I’ve had a fantastic spring so far as an apprentice. I know that senior jockeys would have been calling up to get this ride today. Credit to the owners and trainer for keeping me on.

Poy concluded: “A big thanks to my manager, Rhys Murphy, and my boss, Henry Dwyer. I know my Mum and Dad would be so proud. And my girlfriend. I’ve got so many people to thank.”