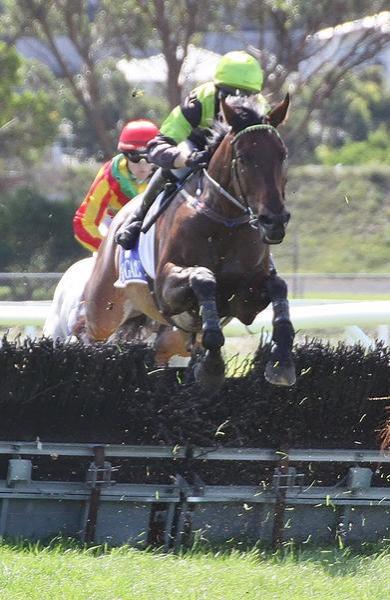 Story by Racing.com and Photo by Peter Morganti

Dashing jumper Beer Garden demonstrated he would be a force at next week’s Oakbank Easter Carnival with a brilliant win in the $20,000 Bill Phillpot OAM Hurdle at Warrnambool on Sunday.

The Dan O’Sullivan-trained gelding turned in a dominant display to cruise to a 12-length unextended win in the 3225-metre event.

The benchmark 125 event was run just eight days before the $100,000 Yalumba Hurdle (3600m) at Oakbank, which prompted O’Sullivan to consider whether he should run or not, but he was glad he did.

“It was in the back of our mind whether it was the right thing to do or not, but he’s come here and had a pretty comfortable day out,” O’Sullivan said.

“It was either come here and race for money or stay home and give him a good school or something during the week, so this has worked out pretty well.

The son of Aristotle made it two wins from as many jumps starts this time in – and three hurdle victories overall – when he cruised home clear of Mateo, who finished two lengths clear of third placegetter Singersongwriter.

The eight-year-old had the race in his keeping from well before the home turn, but winning jockey Patrick Flood said he switched off once in front and would relish the stronger competition in South Australia.

“I think he’s going to improve a little bit off it again,” Flood said. “I hope there’s a bit of speed on at Oakbank because he’s getting that little bit older now and he pulls up in front, so the longer we can leave it (having to make our run) the better.”

Beer Garden’s win completed a winning double to start the day for Flood, who opened the meeting with victory aboard the Leon and Troy Corstens-trained Set You Free in the 3YB The Morning Rush Maiden Hurdle (3225m).