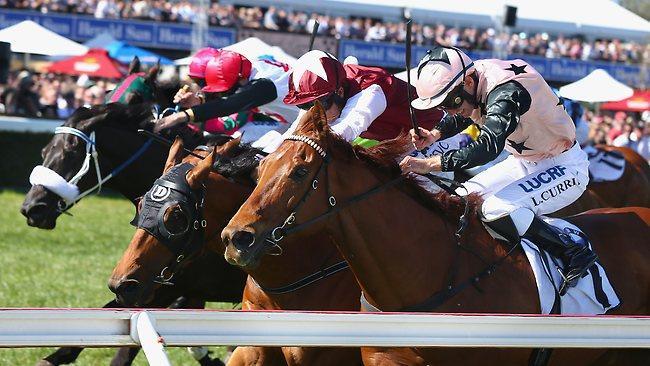 Story by Neale Donnelly at TVN

Ballarat trainer Dan O'Sullivan will set his gutsy British General for the $1 million Emirates Stakes (1600m) after his brave win at Caulfield on Saturday.

"Oh man he deserved that win today, he really did," an emotional O'Sullivan said after the win.

"He looked completely shot, didn't he, yet he fights and fights.

"He definitely needs a mile now, definitely wants the mile," O'Sullivan said, virtually talking to himself.

Today's gallant win over 1400-metres was in the Listed $120,000 Weekend Hussler Stakes, with British General and rider Luke Currie going straight to the front.

"He was beaten 15 times in the straight but he just refused to stop, and on the line, where it counts, he was back in front again," Currie said after the race.

British General has a lifetime history of 'fighting' to save himelf, having beaten the bushfires several years ago when he escaped from a burning stable.

O'Sullivan will take British General to the Emirates via an unusual path.

"There's a Group 3 race over 1400 metres on Derby Day – he'll run in that then I'll back him up in the Emirates a week later, just like we have backed him up this week from last week," he said.

"Three weeks to Derby Day then the seven-day back-up – perfect."