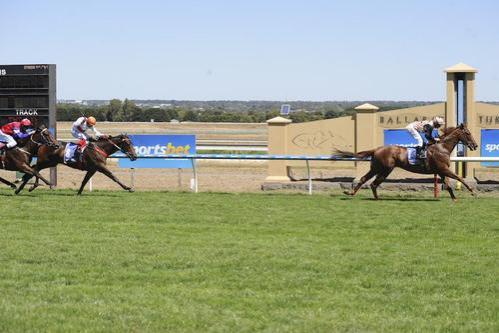 Dan's good run of winners continued at Ballarat on Friday with an impressive win to British General.

A 4 year old gelding by General Nediym out of British Lion, British had always shown Dan a stack of ability. Unfortunately he has only been able to race twice in his career, the first start being way back in October of 2010 in a listed race at Caufield. On that occasion, despite being far from disgraced, he sustained a serious injury and it has been a long road to recovery. But Dan and owners Kathy and David Brown have been very patient with him and have now been rewarded.

He showed no signs of his injury on Friday and in a dominant display against a handy field of maidens, British ran to an early lead then kicked clear down the dip and coasted over the line by 3 lengths. A margin that could have been extended had jockey Luke Currie produced the wip!

Contragulations to David, Kathy and there family. Lets hope the next celebration is not too far away!