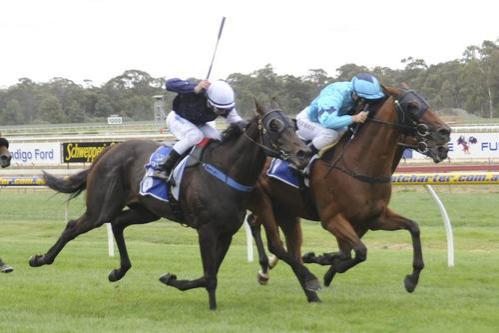 Golden Calibre broke his "bridesmaid" tag at his 24th start on the weekend. Back to one of his favourite tracks at Bendigo, Goldy Boy made a sustained run from the 1000m mark where he was at the rear of the field, to pass the post first in an exciting finish.

A great ride by Luke Currie, some interesting tactics by another rider meant he had to carefully plot his course, but he guided Golden Calibre through the field and timed his sprint to perfection.

Both Dan and loyal owners Peter and Maureen, were as much relieved as excited to get this first win on the bored. Hopefully Golden Calibre can now go on and reward some of the faith that his connections have shown in him.

Congratulations to Peter and Maureen, the old adage that good things come to those who wait has really proven true this time!