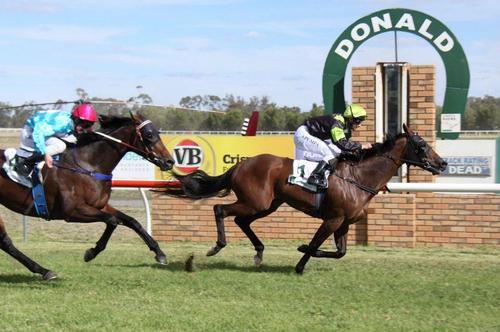 Yesterday Dan and the team travelled to Donald where he was sure he'd return with two winners.  Gorilla's Mist just missed out, running second but Beer Garden kept the flag flying with a convincing win in the 2000m Liston Landers 0-68 handicap.

It had been more than 12 months between drinks for Beer Garden's connections who have been very patient with Dan's faith that he could overcome some leg issues. Especially for part-owner John Brigham who attends every race.

Stepping up in distance, a good barrier saw Beer Garden avoid the bad luck in running he has encountered previously saw jockey Matt Pumpa confident in front the entire journey.

Now he's back in form, we're sure connections won't be thirsty for very long again!