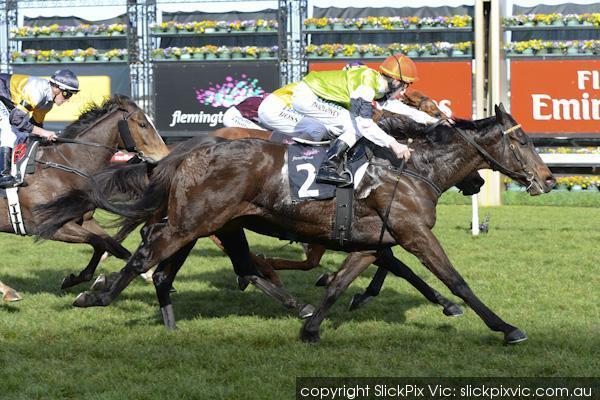 Tuscan Fire is nine weeks from his rich spring goal but the seven-year-old showed he has returned in terrific order with his upset win in Saturday’s Lesley Viney & Colin McKnight Handicap (1410m) at Flemington.

The gelding resumed from a spell following a bumper summer campaign that yielded two Flemington wins as well as a Listed Mornington Cup (2400m) win, which qualified Tuscan Fire for a Caulfield Cup start.

Having a Caulfield Cup start in his keeping has allowed trainer Dan O’Sullivan to keep an open mind when assessing Tuscan Fire’s spring program but he decided to kick off his charge’s campaign over 1400 metres in the $100,000 contest.

O’Sullivan booked apprentice Patrick Moloney to ride Tuscan Fire instead of his summer partner Glen Boss, which many took as a sign the son of Tuscanos would need the run, letting him get out to $101 on track.

Tuscan Fire settled back in the field for Moloney before the youngster brought him with a big run down the outside of the track to beat the Malua Racing-trained favourite Henwood by a short half-head.

O’Sullivan said Tuscan Fire had worked well in the lead-up to his first-up outing but he thought the stayer would need the run as well as more ground to be a winning hope.

“That was just a real bonus. He’s come back well,” O’Sullivan said. “He certainly wasn’t wound up and ready for today but everything he has done has been good.

“When you look at him in the yard he’s still pretty fluffy and woolly.

” There was good solid pace early and he let go with a big finish. I’m just rapt because it was a big win.”

O’Sullivan said he was yet to decide Tuscan Fire’s path to the Caulfield Cup but the $60,000 winner’s cheque would pay the nomination fees for the races he decided to contest with his charge.

“That goes straight in the bank to pay that and a few nominations to other races on the way through now,” O’Sullivan said. “We have got a lot of options, he might run in the better races now. We’ll just see but we’ll enjoy today first.

“I’ve had a little plan of a couple of 1400 then 1500 or a mile and just see where he’s at and what we do. I still think the Benalla Cup would have been a nice little race to have him guaranteed that he’s going good enough to run in the Caulfield Cup.”

Tuscan Fire posted his 11th win from 46 starts in the Flemington event with his prizemoney tally leaping to more than $610,000 with his latest success.